How Mr. GRIBBIT got LOL’ed

DEAR FRIENDS AND FAMILY
LAST NIGHT MR. GRIBBIT DIED
HIS LAST MESSAGE WAS ‘WTFLMAO’
WHICH HE SENT TO MR. CLYDE

POOR POOR MR. GRIBBIT
LOOKED LIKE A SQUASHED TOAD
I WISH HE WAS NOT ‘TEXT-DRIVING’
AND KEEPING AN EYE ON ROAD

SOB SOB MR. GRIBBIT
WE ARE SHAKEN TO THE CORE
ONE MOMENT HE WAS ROLF’ING
AND THEN HE WAS NO MORE

NOW NOW MR. GRIBBIT
NO NEED TO HAUNT THE RILL
WE DID’NT CALL YOU AN IDIOT
OR NAME YOU ROADKILL

HEY HEY MR. GRIBBIT
I HOPE WE NEVER MEET
BUT PRAY YOU GO TO HEAVEN
AND GET A WINDOW SEAT 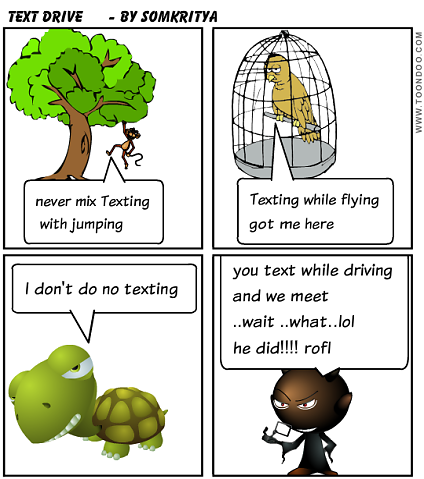 As soon as October hit the town so did a Horrible terrible news. Someone was told by someone, who got this news from someone who was told by this someone that  3rd of October was going to be the scariest spookiest night

By morning of 3rd October of it was end of the world news,

3oo demons who were aliens who were zombies
with venom of pit viper were going to attack the town
But Julien was angry not scared that day
she had just spent so much on her wedding gown!!
some took all that they could and hid under their bed,
some took refuge in their wine cellar and drank whole night.
( it was their tribute to their collection )
some drove as fast as they could to get out of the town and reach someplace safe, but landed up in jail for a night
( it is the safest place on earth, ask the Politicians)
some hid in the grave yard ( brilliant,
cos none of the 300 evil venom spewing monsters would have ever looked there)
some decided to stay in their cars, some on the roofs, some in the tree house
and some just ran and ran and ran till they could run no more (and broke all the world records)
Then there was this rock band which was not popular at all, they played their music on the street’s whole night
(The idea was to get famous like the musicians of Titanic)
This must be the reason why the town was spared that night, said someone later (some one is jealous of the band )
And then there was little Kipkomp who painted his mom’s favourite sheet black and wrapped around him to become invisible
(I am sure his mom got a bad heart burn that night
but it was last day on earth kind of situation so she kept mum)
3oo demons who were aliens who were zombies
with venom of pit viper were going to attack the town
some tried keeping calm and helping others
But the brave spent the night with cuss, fuss and frown
Everyone prayed and asked god to spare their lives in exchange for all the good they had done or thought and wished the scary things attacked someone else, like the politician they didn’t like  or the one who knew their secret or someone who they thought was not worthy of life at all.
[Angels were busy shredding wishes like these that night]
Anyways so nothing happened that night and morning of 4th everyone found out, it was all just a rumour. People made fun of each other and claimed they knew all about  it from the very beginning and were playing along to see how far others would go.
3oo demons who were aliens who were zombies
with venom of pit viper were going to attack the town
Jim was just pretending to be scared
But Mr X , oh he is such a clown!
So next day when the entire town was busy with doing nothing good, our Little Kipkomp was trembling with fear, for him the rumour had become truth and a scary thing was coming for her favourite sheet which was now painted black. He was praying with all he had for at least one alien attack.
( Please God help,how many times does a kid ask you for an alien or a monster attack
if you help me today I  promise I will listen to mom and not draw  on the walls)
Help!!!!
♠♠♠ 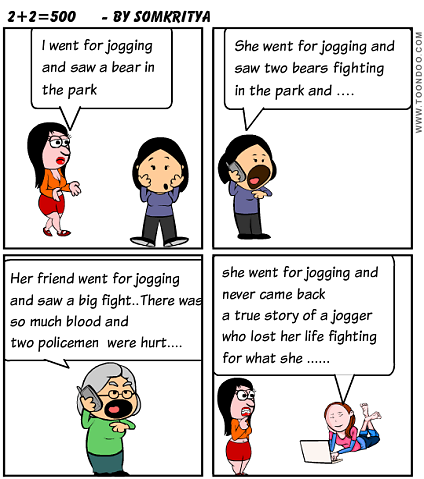 In the ruins of Bhangarh

Most would start this story from the very beginning but something tells me to first show you this Last diary entry of some boys who went missing….

“I woke up at 7 am to find myself in the middle of nowhere, turns out we’d lost the way back and my friend who was driving had parked the car and dozed off. Boy, he must have gone through crazy shit. But now, it was daylight, we felt safer, though we had no clue where we were and there were no people around! There was no mobile network, so we couldn’t make calls. That was still manageable, but the car? it would not start!”

A search party went looking for these boys but no success…only their car, a camera and a diary with these notes scribbled were found. Apparently, they visited the place for a night of ghost hunting.

It’s said those who do not respect life,
Never get respect after death
For life and death are two lovers cursed never to meet
Just like shores of a river in which flows our souls
And it’s this curse which keeps these two lovers forever longing for each other that has also cursed the souls who died of betrayal, wandering in the Human realm forever looking for peace and a way out
And the places they once used to live and died are forever haunted by their presence

This is one such story

Of life and death

Of hauntings, of missing people

Of curses, of myths, of beliefs

This is the story of Bhangarh

A place so haunting that finding a sign of human life before sunrise and after sunset is almost impossible and those who dared and challenged the notices and warnings have never been seen again. 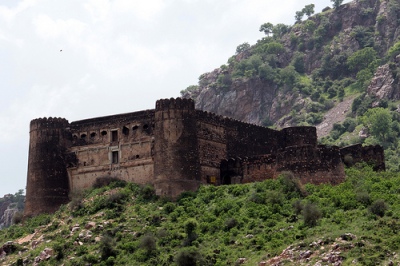 Bhangarh is in Rajasthan state of India, known for its ruins, but still worth a visit; the place is beautiful and tranquil. What remains though, is a shadow of a once beautiful kingdom.

The biggest thing is that as per Govt. of India rule there has to be an office of Archaeology Survey of India (ASI) beside every historical structure in India. But even Government authorities couldn’t dare to open an office there and they opened their office about one kilometer away from the ruins of Bhangarh.

Of the several stories floating around in the Bhangarh air-

“The moment the shadows of your palaces touch me, the city shall be no more!” said Balu Nath

But one of the descendants of palace raised it and its shadow on Balu Nath’s retreat caused destruction and death, earning his wrath

Balu Nath is said to lie buried there to this day in a small Samadhi.

Another story is of beautiful princess of Bhangarh Ratnavati

A story of cursed beauty-

In Bhangarh lived a tantrik (a magician well versed in the occult,) named Singhia

And he waited for the princess to touch the cursed oil

A magic that would make princess surrender herself and run to him.

The princess, however, saw tantrik enchanting the oil, and foiled his plan by pouring it on the ground.

As the oil struck the ground it turned into a boulder, which crushed Singhia.

Dying, the magician cursed the palace with the death of all who dwelt in it.

The next year there was a battle between Bhangarh and Ajabgarh in which Princess Ratnavati perished.

No one knows which of the stories to believe but over the years the hauntings have left many people missing, and even those who do visit in broad day light feel an eerie restless air around..

The local folks say that due to a curse the whole town was vacated overnight. According to the story of the curse, if the town was ever rediscovered the township would not be found, but only temples would show up. And none of the houses of that period have roofs on them

True to the story only temples dot the landscape and even far up on the mountains only shrines can be seen. It is said that once you have broken the rule and gone to the ruins after dark there is no way back….

Any place with great historical past inspires us, fills us with a sense of pride and wonderment but castles or palaces haunted and colored with myths or real stories of death immediately connect us with the tortured souls….. such is the power of death and life after it..

How strange is it?

and will defintely write about it….till then

“…..No Heaven can come to us
Unless Our hearts find rest in it today
Take Heaven
No peace lies in the future
that is not hidden in this present instant
Take Peace
The gloom of the world is but a shadow.
Behind it,yet within our reach is joy
Take Joy……..”

I told them hundred things that
could have scared anyone with a little brain
but I guess when you are this dead
you are not scared of cramps,vomit and pain

and I would have lived
had the cannibals stayed away
that night I ended up in roasts,curries
pies and souffle’s

some said Aaaw so sweet, so cute
and way to go girl, enjoy being dead
and do you know how many liked that status!!
more than 300