Why aren’t we talking about Cockroaches?

I want to know. I really really do! why cats, why not cockroaches? Pages after pages filled with nothing but poems and essays and stories about cats, what’s with that?

Some people asked me if this was the reason I have been missing from blogosphere, why, yes, I was! So disturbed and depressed was I with the kind of shoddy treatment cockroaches have been getting  that I left this world. Out there in the space I met some really intelligent people who told me future belongs to cockroaches, not cats. They advised me to return to my planet and work on making the world cockroach friendly.

DAY 1 BLOGGING ABOUT COCKROACHES. MY APT AND SHARP REPLIES TO ALL THE PEOPLE WHO WROTE ABOUT CATS NOT BECAUSE THEY LOVED’EM BUT BECAUSE THEY WERE ANTI-COCKROACH HUMANS.

1) Kittens can happen to anyone. ~Paul Gallico

Why Sir, so can cockroaches, what’s with this song and noise?

2)“I wish I could write as mysterious as a cat.”

something that has been here for millions of years, survived nuclear attacks,  living -procreating under your cabinets, behind the walls. You think it is gone, but a lil heat and damp, it re-surfaces. All these and much more and you still think Cats are mysterious?

ask the pesterminators what keeps them awake at nights, ask the scientists if they are sure the latest spray can get rid of roaches completely and they run and hide in a cabinet and howl like a mad wolf.

I wish I could scribble like cockroaches Mr. Poe!

oh pulheeese, no way. Go get some bagels. cockroaches are proof that you have food clothes, toothbrushes ,hair , fresh or decaying matter in possession. either this or you live in sewer, either way you have something!!

5) “Of all God’s creatures, there is only one that cannot be made slave of the leash. That one is the cat….
― Mark Twain

ha ha ha yeah Mr. Twain cos we sure can make cockroaches our slaves

6) It is impossible to keep a straight face in the presence of one or more kittens.

7) There has never been a cat
Who couldn’t calm me down
By walking slowly
Past my chair.
~Rod McKuen

Well Mr. McKuen, There has never been a cockroach who couldn’t get me up By waking slowly Past my chair. what do you have to say about that huh?

There I have proved each and every anti- cockroach person wrong. In fact before publishing this article I sent a copy of this excellent piece I created to all of writers mentioned ( yes all of them) and all of them have since apologised. They have realised their folly.

But what about you COMMON PEOPLE, when will you understand the power of coackroaches, or will you rather be unprepared and be treated a slave in a Cockroach World? 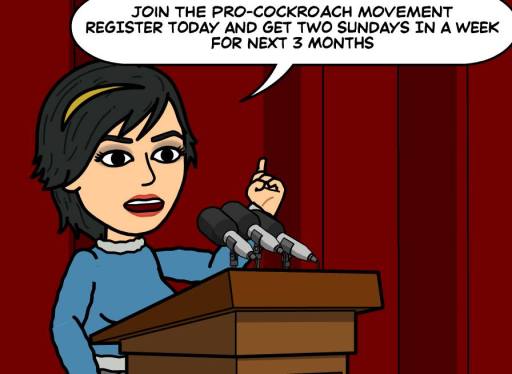 Join now or be left behind with nothing but regrets and no entry to rock concerts, ever.

Hope with this post I have succeded in creating awareness about THE MIGHTY, SUPREMELY TALENTED, MYSTERIOUS COCKROACHES.

(if not, do write so that I can repost it till you get it.)

Thanks and happy HOLI

Greatest Story ever told is on another shelf

Peter Cameron once wrote that one man’s nonsense is another man’s sense. God forbid if someday someone ever even in the tiniest possible way understood the nonsense I weave. That day my friends is not one I would like to see. That day all the dinosaurs and dodos will disappear from the face of earth for good and no one, not ever Steven Spielberg will be able to bring them back even on screen.
Anyways so I was reading Zombie Haikus by Ryan Mecum. Let me take a moment here to tell you guys about Ryan Mecum. He is God of fun haikus and poems. Be it Zombies or Vampires or Werewolves, Ryan has written about all of them. like check these out-
“Those were not vampires.
If sunlight makes you sparkle,
you’re a unicorn.”
and
“Blood is really warm,
it’s like drinking hot chocolate
but with more screaming.”
Haan how cool is that? Click these links to read more and you will be so happy that may be you will adopt a vampire or a zombie today.
RYAN MECUM GOODREADS
AND ON TWITTER
Twitter-Mecum Haiku
AND HIS WEBSITE
RYAN MECUM
so as I was saying I was reading Zombie Haikus and was so horribly terribly inspired that I wrote a poem on Zombies ( cos I don’t know how to write a haiku)  which is Dark and Gory and deadly and deep and horrible and everything that is bad but in a good sort of way.
There was once a zombie
who married for treats,
then the treats disappeared
and all that was left was gift wraps
and empty boxes
Then he was shot in a grocery store
cos people thought he was going to eat them
and why a zombie would want to buy bleach
they couldn’t understand
But Zombies don’t die unless shot at head
the grocery store security guy didn’t know that
so the zombie kept getting up and shot
again and again and a few times more
it was like a big, giant story of
death and re birth all happening
so fast and so may a times
and the security guy was in tears
crying why don’t you die
you horrible thing with a bottle of bleach
All this was so funny in a horrible sort of way 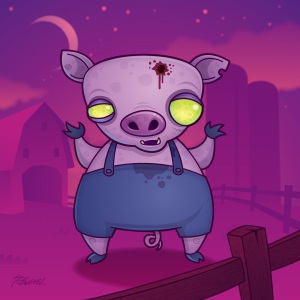 Happy weekend ya all 🙂

Rats in the attic

There are two kinds of rats, the Attic rats and the Gutter rats. Easy to tell them apart if you are an avid Rat watcher. However I do not discriminate, I hate all the rats equally. Brown or Black, Rich or Poor,  Asian or European. Rats are Crats and if you do not find a way to keep them away they soon find a way to czrat zrat zrat zrat ztat za ztat za ztat which is rat language for-I will chew on your stuff and pee and poop inside your house .
A wise old Rat once told me that the rats who live or work in attic are considered Elite (Tom Cruise of MI6 elite) in their community and not only are they experts in all kinds of invasions but are also very light on their feet. That is they can tip toe around easily  and never get caught, unless they want you to know of their presence, something they do when they want to creep you out or to challenge themselves. And one has to go through very tough selection process and a tougher training before one can even dream of being in the attic.

So it generated a lot of  buzz and squeaks when Captain Rat ‘o’ Cheekay chose that odd ball Blinkin’ Kalamiti to be an Attic rat. One look at him and you would know he didn’t fit in the Elite Attic Rat community.
Blinkin’ Kalamiti ( BK) had some real problems, behavioral as well as occupational. And within a month of joining the forces he had made quite a few enemies and haters in the Elite Community. Other Rats liked him as much as they liked a mosquito Buzz or a fresh stain on a new sofa or a pimple on nose on the wedding day.
Finally fed up with his odd behavior, Lartata and Bartata, two of the most feared and respected Elite Attic Rats wrote a letter to the Captain mentioning the problems they have been having with BK, requesting Captain to either send him for a long training or a transfer to not so elite Box or Garage Rat community.
Here are the letters exchanged between forces and their Captain regarding the BK issue.
Dear Captain,
We do not know how to write this but what the hell Capt’, BK sucks big time.
-he is stupid
-he makes a lot of noise when he moves
-lies still and pretends to be dead and expects us to cry and mourn over the great loss
– spends half an hour every morning asking every lieutenant of the Forces if they think he is fat.
– he is slow, too slow, so slow that humans of this house have seen him, something which put a big question mark on our work ethics. Today humans have seen us, tomorrow we will be their pets!
– he is allergic to cheese( now what kind of rat is allergic to cheese, a STUPID rat who else!)
-he refused to go to the neighbouring attics three times in last week. He said and we quote “my inner voice tells me not to”
-he can’t read or write and when asked to learn he said and we quote ” Now I ain’t made to serve words, words are meant to serve me, tell the words or whatever it is you want me to learn to learn me.”
-he saw his image in the mirror yesterday, went  straight to a bar and gulped down a whole bottle of dulcolax  cos some fool down told him that would make him look suave and has been pooping ever since in every part of the house, leaving a trail.
-loses temper when the humans move their furniture
-wears eye patch and plays pirate
-hates blue and green colours
-in the middle of a high risk invasion asks us if any girl is checking him out or not
Sir we have tolerated him enough and any more of him would be setting a wrong precedence and example. We therefore request you to either sack him or send him to another team or a training or we will have no choice but to leave the force
Thanking you
Yours Faithfully/Sincerely/ Loving/Caring
ROEARF( rats of elite attic rat forces) 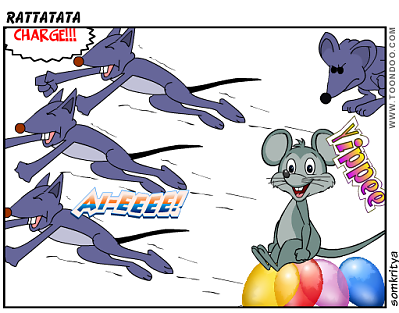 Dear Capt’
Dear sir we got it. We never had any problem with BK. He is a sweet kid with a sharp mind. Some of us just wanted to know more about him, that was all.
Yours Respectfully/Obediently serving/ Loyally yours
ROEARF( rats of elite attic rat forces)
Oh don’t we all know how lovely it is to have a Boss’s Relative as a co worker. Coming back to rats, the Elite Rats are now a days singing a new song to cope up with the disaster known as Blinkin’ Kalamiti !
The New guy is boss’s nephew
hola hola ho
so what if he ain’ gotta clue
hole hola ho
kiss his booty make him happy
or else the captain will be snappy
lets take him to drink and entertain
smile and laugh with that giant pain
hola hola ho
ÒÓÒÓ
(Do not copy I failed my Anger Management class)
29.643362 79.432182

Yeah right! So I have a plan and instead of doing something about it, like getting rich, I blog….DUH! Davy Jones’ Locker awaits all ye Landlubbers. Read this poem instead.
once upon a time in a faraway land
lived a pirate,
his name, no one knows that,
but let’s call him Pegleg McStinky.
He wore one eye patch
his left hand was a hook
and right leg was all wood
his teeth were dark yellow and black
and he would often sing songs
write poems and look up in the sky
and ask God why o why
why was he all alone in the island,
where was the ship,
where were his pirate buddies,
why were the monkeys in the island
always attacking him,
why did pigs there bite his bum
when he tried to sleep,
what is a treasure
and where was it,
and most importantly
what to do when the stomach growls
day and night ?
He died looking for answers
and treasure in the island.
How sad and scary the story of
Pegleg McStinky
whose belly growled
excessively.